About the Snow Goose

Lesser snow geese breed along Queen Maud Gulf, Baffin Island, Banks Island and Victoria Island; in the Northwest Territories and on Hudson Bay. They nest on low, grassy tundra plains and broad, shallow rivers near the coast, and on islands within shallow inland lakes. Lesser snow geese nest in colonies and lay an average of 4-5 eggs.

Lesser snow geese have two color phases: a dark (blue) plumage and a white (snow) plumage. The two-color phases are variations within the same race and do not indicate separate races. The sexes are similar in appearance in both phases, but the female is often smaller. Lesser snow geese can hybridize with Ross’ geese, which are similar in appearance. They have pinkish bills with black grinning patches, and the feet and legs are reddish-pink. In the dark phase, they have white heads and upper necks, with bluish-gray bodies. In the white phase, they are completely white except for black wingtips. The head can be stained rusty brown from minerals in the soil where they feed. They are very vocal and can often be heard from more than a mile away.

Lesser snow geese historically migrate from their northern breeding grounds down the Pacific and Mississippi Flyways, to winter in the Central Valley of California and the Gulf Coast of Texas, Louisiana, and Mexico. There, the abundant emergent vegetation of the brackish and salt marshes provide both food and cover. Recently, they have expanded their winter range to interior agricultural lands in states such as Arkansas, Mississippi, Louisiana and Texas, where corn, rice and pasture grasses provide abundant food supplies.

Looking for more information on geese and ducks we shoot at North Texas Waterfowl? Shoot on over to our waterfowl id page and see what species of ducks and geese we regularly shoot at NTX Waterfowl Outfitters! 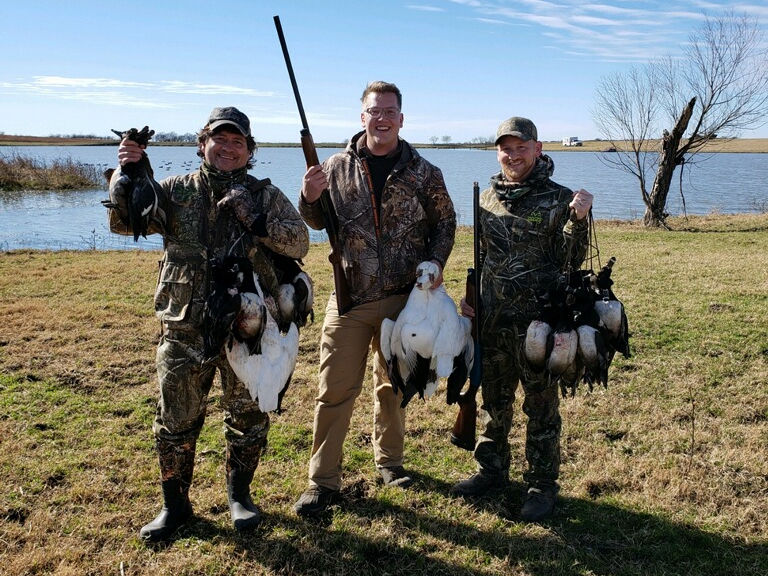 North Texas Waterfowl’s snow goose hunts are a great opportunity to hunt some of the best locations in Texas! Our guided snow goose hunts book quickly, so call today to make your reservation.

Whether you are looking to shoot Canada Geese or Snows in a winter wheat field, we have the perfect trip for you. You will find that all of our goose hunting gear is the best the industry has to offer and our goose guides go the extra mile to ensure that your group has a great time and harvest. We only take out one group of snow goose hunters a day, so your group will have our exclusive attention!

North Texas Waterfowl provides all of the equipment, snow goose decoys, dogs, etc. We scout our various properties daily to ensure that our clients have ample fowl and shot opportunities for a successful goose harvest. All of our hunts are fully guided. Inquire about snow goose conservation hunts today!

Food not included. Bring snacks for the duck blind.
*Rates do not include transportation to Texas, rental car, guns, ammo, licenses (North Zone), gratuities. (A 15-20% gratuity is suggested.)

*Non-Refundable Deposits of 20% is due at booking. Balance is due 30 days prior to your hunt or when you arrive for your hunt.
*All hunting packages are priced per person.

with fishing in the evening on Lake Texoma fishing for Striper. (TEXAS ONLY)

What To Bring With You!

Waders: Most blinds are accessible without them. However, not having them could cost you an opportunity.
Outerwear: Prior to leaving home, we recommend checking either with us or a trusted weather source in order to prepare specifically for your dates here with us. Rain gear is always recommended.
Camo Patterns: If a choice can be made, try to keep things on the hardwoods or marsh end of the spectrum. Sometimes brightly colored patterns look out of place in this region.
Gun/Shells: A 12 gauge is sufficient for most of our spots. Also it is recommended to have either a modified or improved cylinder choke. We suggest a quality steel or other non-toxic shell with 1 1/8 oz. to 1 3/8 oz. of shot depending on chamber length and gauge of gun. BB, BBB or T shot is recommended for goose hunts.
License/stamps: Each client MUST have a Texas hunting license and Migratory Endorsement along with a Federal Waterfowl Stamp.

Food not included. Bring snacks for the duck blind.
*Rates do not include transportation to Texas, rental car, guns, ammo, licenses (North Zone), gratuities. (A 15-20% gratuity is suggested.)

*Non-Refundable Deposits of 20% is due at booking. Balance is due 30 days prior to your hunt or when you arrive for your hunt.
*All hunting packages are priced per person.

with fishing in the evening on Lake Texoma fishing for Striper. (TEXAS ONLY)

Texas is legendary for offering some of the best Texas goose hunting in the Central Flyway! Our duck and snow goose hunts are among the best in the North Texas region. At North Texas Waterfowl, every effort will be made to provide you with a quality safe hunt. Our goal is to offer you a Professional Hunt and Personal Service with a Down Home Atmosphere. Come join our experienced guides and enjoy North Texas Goose Hunting at its finest! Get ready as swarms of snow geese, Canada geese, mallards, pintails, gadwall, widgeon, teal, with mixed limits of ducks and geese including Canadas, Specks, and Snows.